The Rugby World Cup is currently taking centre stage at the moment and there are a lot of questions about the high-tackle rule, concussion and player injuries.

In this podcast, Dr Martin Raftery and Dr Ross Tucker take a look at the challenges facing the various stakeholders:

We would love your thoughts on the below article from Francois Cleophas on the role of educators in the fields of sports science:

In the four years since the decolonisation debate took centre stage at South African universities, much of the focus has been on what decolonisation might look like in the humanities.

But science subjects, too, need to be taught differently at African universities in the 21st century. This is true of my discipline, sport science. The content of the sports science curriculum needs to change. So does the focus of sports science departments. Increasingly, such departments at public universities rely on private funding to operate. This means they are driven by corporate and donors’ interests, doing less for the public good and not necessarily producing social and political critical thinkers.

Both the curriculum and the structure of sports science departments needs to be overhauled. This is necessary, because nothing in the ideological content of sport science curricula has changed over the past 25 years.

In fact, it can be argued that the sport science curriculum, driven more and more by semi-private institutions at public spaces of higher learning, is more committed to a neo-liberal capitalist project today than what it was 25 years ago.

The history of modern day century sports science, as an academic discipline, dates back to the early 20th century when the medical fraternity and physicians became interested in athletic contests. One such doctor, R. Tait McKenzie, published one of the field’s earliest scholarly texts, Exercise and Education in Medicine.

This book reflected and enforced the cultural hold that the western (Hellenistic) presentation of the human body exerted in the emerging field of sport science. The Greek body – white, muscular, masculine and middle class –dominated as an ideal type. This dominance continues today. What wasn’t discussed was that ancient Greece was a slave-owning society that exploited inequalities based on race, gender and class.

As scholars like Ina Zweiniger-Bargielowska have highlighted, physical culture around the turn of the 20th century existed against the backdrop of competing conceptions of masculinity and a wider debate about the fitness of the British “race”. The scientifically trained sport body, sculpted by the sport scientist, became modern society’s idea of the perfect body.

The untrained body – that is, not trained by a sport scientist – is often presented as the “other” type. These “untrained” bodies are often developed in community sports in local communities without the high costs that accompany sport science interventions. These forms of exercise are looked down on and sports science students are taught that these matter less. Ordinary people in these communities are made to believe that their exercise regimes, and ultimately their physical bodies, are not valid and are unimportant.

There have also been few strides in addressing gender discrimination in sports science. White male bodies are the focus. Students are not taught about alternatives or given space to criticise traditional approaches.

The field of sports science, then, has neglected the development of a thorough, critical analysis of how gender, race and class inequalities play out in sports science and exercise.

But altering what we teach is just one part of the challenge for South African sports scientists.

As sport scientists, we no longer focus primarily on generating and dispensing intellectual knowledge about sport to local communities. Instead, we accumulate knowledge primarily for performance appraisals in accredited publications for distribution in academic circles. This means it’s shared with fewer people.

In this way, sports science’s intellectual property has been captured by what scholar Lesley le Grange refers to as the knowledge economy in the ascendancy of the neo-liberal university.

What does all this mean, in practise?

Simply put, if sport science wants to be relevant to ordinary people, the curriculum needs to be taught and thought about differently. There must be a commitment to a decolonised way of doing things. This means teaching students about different bodies, about different fitness regimes and approaches, drawing from indigenous knowledge systems about what builds a strong body.

This article is republished from The Conversation under a Creative Commons license. Read the original article.

On this episode of the Healthy Wealthy and Smart Podcast, I welcome Andrew Vigotsky and Dr. Nick Rolnick back on to the show to discuss Andrew’s paper, Interpreting single amplitude in sports and rehab sciences.

In this episode, the team discuss

-What information can you conclude from a surface EMG study

-The limitations of surface EMG research

-What to look for in a surface EMG methods section

About Dr. Nicholas Rolnick:
Nick is a licensed physical therapist, the founder of the Human Performance Mechanic and the co-founder of Blood Flow Restriction Pros. He received his Doctor of Physical Therapy Degree with academic honors from Columbia University in New York City.

Through his work as a physical therapist his goal is to keep his patients in perfect balance, have the skills to recognize asymmetries and help patients enjoy the benefits of pain-free movement.

He teaches across the United States as a clinical instructor for SmartTools Plus and is an adjunct faculty member at Concordia University – Chicago where he teaches Kinesiology I and II in their MS Applied Exercise Science Program. He also speaks nationally and internationally on the use of blood flow restriction therapy for various diagnoses and populations.

About Andrew Vigotsky
Andrew is currently a PhD student in Biomedical Engineering at Northwestern University, where he studies neuromuscular biomechanics. He has published papers in areas ranging from rehabilitation to surface electromyography methodology and biomechanical modeling. His dissertation works aims to understand the neuromechanical implications of muscular heterogeneities.

Do clinicians need to be accurate when measuring ROM? 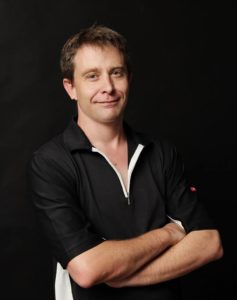 Does objectivity and accuracy matter for clinicians? In the process of rolling out 3D Joint ROM to the market, this has been an interesting question that clinicians have turned back on us and one that I believe should be debated.

The premise behind the 3D Joint ROM tool is that it allows clinicians to accurately measure Range of Motion (ROM) in multiple planes in real-time and provide an objective recording of patient range.

When presenting to clinicians, the question has been asked: “Why do we need objective recordings of ROM? Why can I not simply use my clinical experience to judge improvement or decline?”

As a solutions provider with an interest in accuracy and objectivity, this was an interesting rebuttal. While much has been made about the impact of technology on the healthcare sector and concerns that the subjective skill and analysis are being discounted, we believe we have a couple of comments on this:

A recent installation we did for a podiatrist in South Africa highlighted the importance of objective data when referring a patient. An issue raised by this clinician is that orthopedic surgeons were disregarding subjective opinion and opting to operate despite the patient being within range guidelines.

As patients and consumers are using technology to help educate themselves around their treatments, they are going to interrogate the advice (and associated costs) provided by clinicians. Objective and accurate data will lead to higher quality referrals and treatment plans.

At what exact moment does a patient feel pain during a movement? If you can diagnose the pain point, you can save significant recovery time by focusing on the right outcomes rather than struggling to replicate the movement.

When running a business, it is easy to work out whether you are achieving an outcome: If your income exceeds your expenses, you are heading in the right direction. As a clinician, it’s less black and white and there is significant pressure on clinicians to demonstrate their outcome in an accurate and objective manner.

Clinicians are increasingly reporting that there is a focus on outcomes – particularly from the sports science fraternity – patients no longer just want to hear that “Range or mobility has improved” – they want to know to what degree it has improved as a result of your treatment.

When it comes to treatment and rehabilitation, patient motivation is a major factor and one that many clinicians will battle with. How do I motivate my patient to hit their rehabilitation goals?

By showing a patient real-time data of their movement, they can have an accurate measure of exactly how much further they have improved and aspire to hit their rehabilitation goals. Data that is provided in real-time can add a gaming element to rehabilitation.

When doing some research for this post, I typed into Google “How important is accuracy in Range of Motion measurement” as a search phrase (combination of words not complete search phrase) and ended up with 39.2 million links on the internet. There is clearly a lot of interest in the topic.

Where I think we need to be careful is this narrative that objective technology replaces the need for subjective insights from qualified medical professionals. Technology should be there to support the clinician not replace them or discount their skills.

We at Dynamic Body Technology would love to get insights from clinicians around the importance of accuracy and objectivity when it comes to medical data. Please feel free to leave a comment below or drop me a line on marca@3djointrom.com